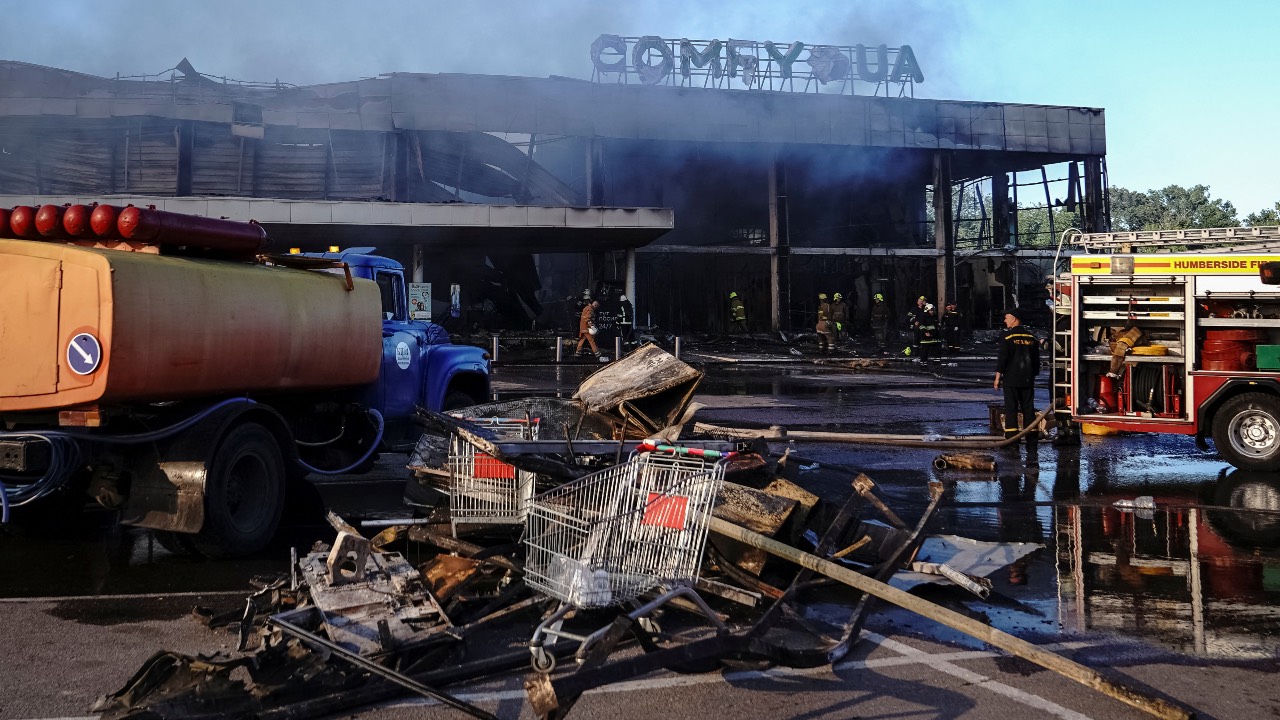 Rescuers work at the shopping mall hit by a Russian missile strike, in Kremenchuk, in Poltava region. /Anna Voitenko/Reuters

Rescuers work at the shopping mall hit by a Russian missile strike, in Kremenchuk, in Poltava region. /Anna Voitenko/Reuters

• A Russian missile strike on a crowded mall in central Ukraine killed at least 18 people and injured another 59, in what G7 leaders branded “a war crime” at a meeting in Germany where they looked to step up sanctions on Moscow. READ MORE BELOW

• Russia’s defense ministry said it fired missiles against a weapons depot in the Ukrainian city of Kremenchuk, with the subsequent explosion of ammunition triggering a fire in a nearby shopping mall.

• Russia will likely be an even greater threat to European security after the war in Ukraine than it was before, said British army chief Patrick Sanders.

• NATO allies will boost high readiness forces to “well over 300,000” troops as they strengthen their defenses in response to Russia’s offensive in Ukraine, alliance chief Jens Stoltenberg said Monday.

• G7 leaders have agreed to work on a price cap for Russian oil, a U.S. official said, as part of efforts to cut the Kremlin’s revenues. G7 leaders will “task ministers to work urgently towards developing, consulting with third countries and the private sector in an effort to develop a price cap around oil,” the senior official told reporters.

• Ukraine has called for an emergency meeting of the United Nations Security Council over Russian strikes on civilian targets, the UN body said, scheduling the event for Tuesday at 1900 GMT. The missile strike on a shopping centre in Kremenchuk “is the main focus” of the meeting, said a spokesman for the Albanian mission, which holds the rotating Security Council presidency.

• Russian hacker group Killnet said it was continuing a major cyber attack on Lithuania in retaliation for Vilnius’s decision to cease the transit of some goods under European Union sanctions to Russia’s Kaliningrad exclave.

• Moody’s ratings agency has confirmed that Russia defaulted on its foreign debt for the first time in a century, after bond holders did not receive $100 million in interest payments. READ MORE BELOW

• Turkish drone manufacturer Baykar, which has President Recep Tayyip Erdogan’s son-in-law as one of its directors, offered three of its drones to the Ukrainian army. 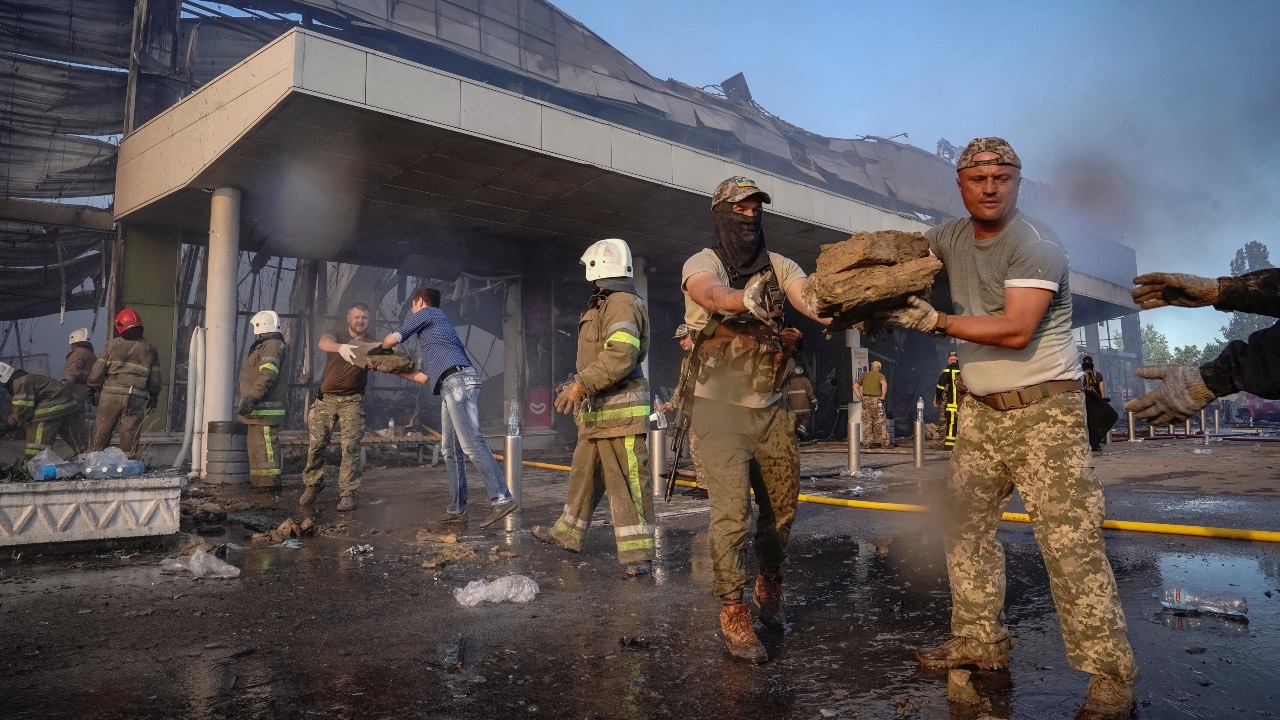 Ukraine accused Russia of deliberately targeting civilians, with President Volodymyr Zelenskyy calling it ‘one of the most brazen terrorist acts in European history’. /Anna Voitenko/Reuters

Ukraine accused Russia of deliberately targeting civilians, with President Volodymyr Zelenskyy calling it ‘one of the most brazen terrorist acts in European history’. /Anna Voitenko/Reuters

A Russian missile strike on a crowded mall in central Ukraine killed at least 18 people in what G7 leaders branded “a war crime” at a meeting in Germany where they looked to step up sanctions on Moscow.

The leaders vowed that Russian President Vladimir Putin and those responsible would be held to account for the strike in the city of Kremenchuk, carried out during the shopping mall’s busiest hours.

“Indiscriminate attacks on innocent civilians constitute a war crime,” they said in a statement condemning the “abominable attack.”

Ukraine accused Russia of deliberately targeting civilians, with President Volodymyr Zelenskyy calling it “one of the most brazen terrorist acts in European history” in his evening broadcast posted on Telegram.

“A peaceful town, an ordinary shopping center – women, children, ordinary civilians inside,” said Zelenskyy, who earlier shared a video of the mall engulfed in flames with dozens of rescuers and a fire truck outside.

Dmytro Lunin, Governor of the Poltava region where Kremenchuk is located, said 18 people were killed in the attack. According to the emergency services, another 59 were wounded.

In a statement posted on its Telegram channel, Moscow’s defense ministry said “In Kremenchuk, Russian forces struck a weapons depot storing arms received from the United States and Europe with high-precision air-based weapons.

“As a result of the precision strike, Western-made weapons and ammunition concentrated in the warehouse… were hit,” it continued. “The detonation of stored ammunition for Western weapons caused a fire in a non-functioning shopping center located next to the depot.” 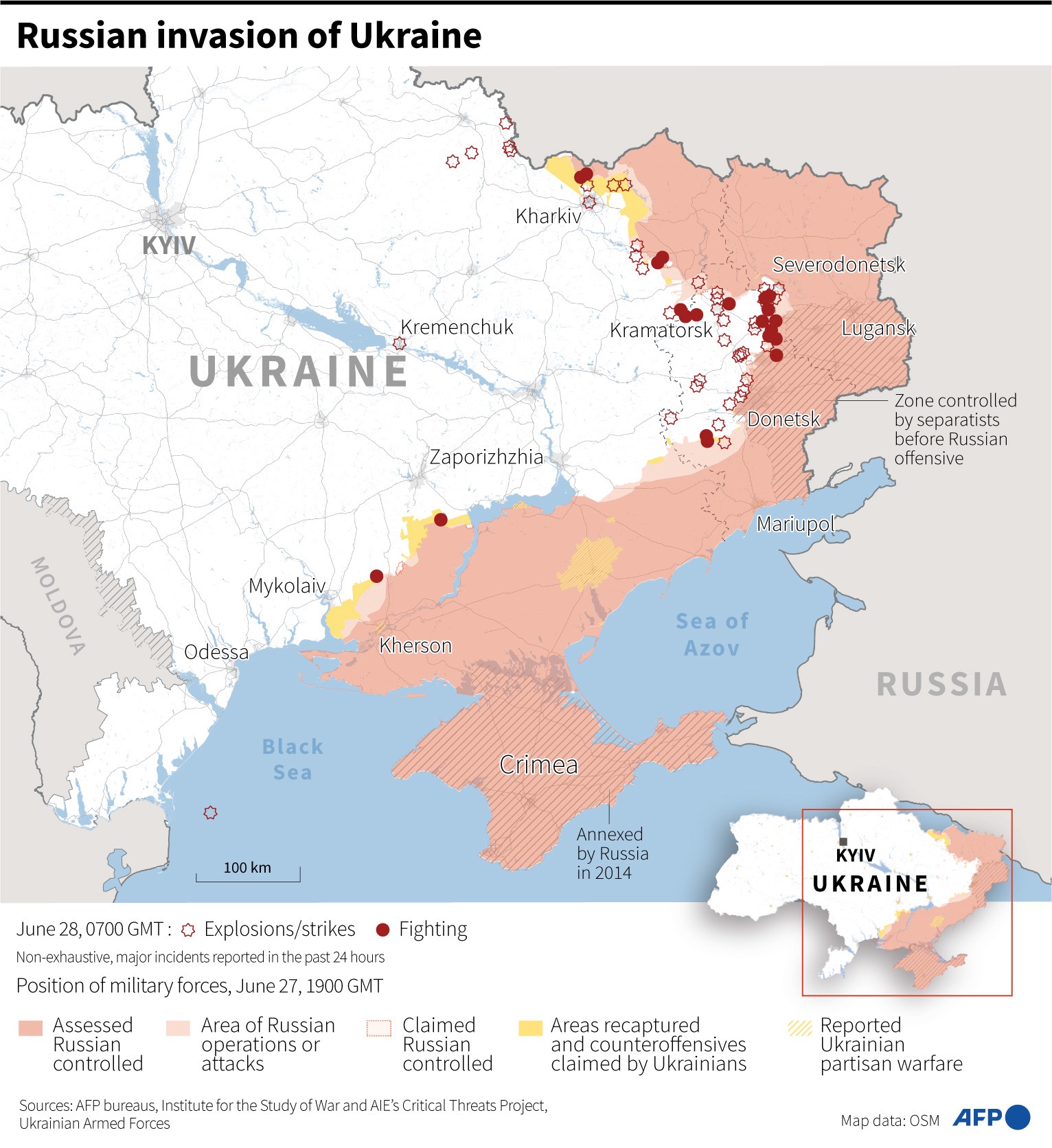 Russia said two of its debt payments were blocked from reaching creditors, pushing the country closer to its first foreign default in a century due to sanctions over the Ukraine offensive.

The announcement came on the 124th day of Russia’s military intervention in Ukraine, with Western sanctions so far failing to force the Kremlin to change its course.

The Western economic penalties have largely severed the country from the international financial system, making it difficult for Moscow to service its debt.

The Russian authorities insist they have the funds to honor the country’s debt, calling the predicament a “farce” and accusing the West of seeking to drive Moscow into a default artificially.

“There are no grounds to call this situation a default,” Kremlin spokesman Dmitry Peskov told reporters after a key payment deadline expired on Sunday.

“These claims about default, they are absolutely wrong,” he said, adding that Russia settled the debt in May.

A 30-day grace period expired on Sunday night for the payment of $100 million in interest payments, most of which had to be paid in foreign currency.